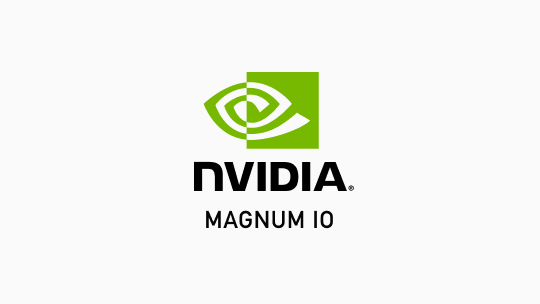 NVIDIA Magnum IO is the I/O technologies from NVIDIA and Mellanox that enable applications at scale. The Magnum IO Developer Environment container allows developers to begin scaling their applications on a laptop, desktop, workstation, or in the cloud.

NVIDIA Magnum IO is the collection of I/O technologies from NVIDIA and Mellanox that make up the I/O subsystem of the modern data center, and enable applications at scale. Making use of GPUS, or scaling an application up to multiple GPUs, or scaling it out across multiple nodes, will probably make use of the libraries in Magnum IO.

The Magnum IO Developer Environment container contains a comprehensive set of tools to scale I/O. It serves two primary purposes 1) Allow developers to begin scaling applications on a laptop, desktop, workstation, or in the cloud. 2) Serve as the basis for a build container locally or in a CI/CD system.

There are two ways to get the container and run it. With either option the system must be setup to run GPU enabled containers, which the installer.sh script can do.

Recommended is to pull the NVIDIA NGC Catalog (option 1). If you plan to customize the container further, it can be used as the FROM to build a new container. Also supported is building the container locally (option 2).

The installer.sh script is designed to detect old versions of dependencies and upgrade them as needed. Simply git pull a new version, and run the system-setup again.

The container should run and build code on any system with a GPU and minimal drivers enforced by the installer.sh script. This allows developers to integrate Magnum IO APIs easily, and get started on almost any system.

However some components of Magnum IO require specific hardware or configurations to run applications with the APIs fully enabled.

In practice, this means almost all development can be done on a local system, many tests can be run locally, but tests at scale are done in a cluster or cloud environment.

The NVIDIA Collective Communications Library (NCCL, pronounced “nickel”) is a library providing inter-GPU communication primitives that are topology-aware and can be easily integrated into applications.

NCCL is smart about I/O on systems with complex topology: systems with multiple CPUs, GPUs, PCI busses, and network interfaces. It can selectively use NVLink, Ethernet, and InfiniBand, using multiple links when possible. Consider using NCCL APIs whenever you plan your application or library to run on a mix of multi-GPU multi-node systems in a data center, cloud, or hybrid system. At runtime, NCCL determines the topology and optimizes layout and communication methods.

In many HPC workflows, models and simulations are run that far exceed the size of a single GPU or node. NVSHMEM allows for a simpler asynchronous communication model in a shared address space that spans GPUs within or across nodes, with lower overheads, possibly resulting in stronger scaling compared to a traditional Message Passing Interface (MPI).

UCX is appropriate when driving I/O from the CPU, or when system memory is being shared. UCX enables offloading the I/O operations to both host adapter (HCA) and switch, which reduces CPU load. UCX simplifies the portability of many peer-to-peer operations in MPI systems.

NVIDIA GPUDirect Storage (GDS) enables a direct data path for Remote Direct Memory Access (RDMA) transfers between GPU memory and storage, which avoids a bounce buffer and management by the CPU. This direct path increases system bandwidth and decreases the latency and utilization load on the CPU.

GDS and the cuFile APIs should be used whenever data needs to move directly between storage and the GPU. With storage systems that support GDS, significant increases in performance on clients are observed when I/O is a bottleneck. In cases where the storage system does not support GDS, I/O transparently falls back to normal file reads and writes.

Moving the I/O decode/encode from the CPU to GPU creates new opportunities for direct data transfers between storage and GPU memory which can benefit from GDS performance. An increasing number of data formats are supported in CUDA.

NVIDIA Nsight Systems lets you see what’s happening in the system and NVIDIA Cumulus NetQ allows you to analyze what’s happening on the NICs and switches. Both are critical to finding some causes of bottlenecks in multi-node applications.

Nsight Systems is a low-overhead performance analysis tool designed to provide insights that you need to optimize your software. It provides everything that you would expect from a profiler for a GPU. Nsight Systems has a tight integration with many core CUDA libraries, giving you detailed information on what is happening.

Nsight Systems allows you to see exactly what’s happening on the system, what code is taking a long time, and when algorithms are waiting on GPU/CPU compute, or device I/O. Nsight Systems is relevant to Magnum IO and included in the Magnum IO container for convenience, but its scope spans well outside of Magnum IO to monitoring compute that’s unrelated to I/O.

NetQ (not in container)

NetQ is a highly scalable, modern, network operations tool set that provides visibility, troubleshooting and lifecycle management of your open networks in real time. It enables network profiling functionality that can be used along with Nsight Systems or application logs to observe the network’s behavior while the application is running.

NetQ is part of Magnum IO given its integral involvement in managing IO in addition to profiling it, but is not inside the container as it runs on the nodes and switches of the network.

Disable "Secure Boot" in the system BIOS/UEFI before installing Linux.

The Data Science stacks are supported on Ubuntu LTS 18.04.1+ or 20.04 with the 4.15+ kernel. Ubuntu can be downloaded from https://www.ubuntu.com/download/desktop

Support for Red Hat is planned in later releases.

It is important that updated NVIDIA drivers are installed on the system. The minimum version of the NVIDIA driver supported is 460.39. More recent drivers may be available, and should work correctly.

Driver install for Ubuntu is handled by ./installer.sh setup-system so no manual install should be required.

If the driver if too old or the script is having problems, the driver can be removed (this may have side effects, read the warnings) and reinstalled:

The NVIDIA Magnum IO Developer Environment is licensed under Apache 2.0 and contributions are accepted with a DCO. See the CONTRIBUTING.md for more information on how to contribute and the release artifacts.

Since the underlying images may include components licensed under open-source licenses such as GPL, the sources for these components are archived on the CUDA open source index. Source and licenses details are also available on the component websites.