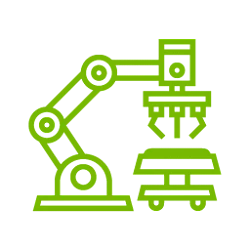 The Holoscan container includes the built Holoscan libraries, GXF extensions, headers, example source code, and sample datasets. It is the simplest way to run sample streaming applications or create your own application using the Holoscan SDK.

The Holoscan container is part of NVIDIA Holoscan, the AI sensor processing platform that combines hardware systems for low-latency sensor and network connectivity, optimized libraries for data processing and AI, and core microservices to run streaming, imaging, and other applications, from embedded to edge to cloud. It can be used to build streaming AI pipelines for a variety of domains, including Medical Devices, High Performance Computing at the Edge, Industrial Inspection and more.

In previous releases, the prefix Clara was used to define Holoscan as a platform designed initially for medical devices. As Holoscan has grown, its potential to serve other areas has become apparent. With version 0.4.0, we're proud to announce that the Holoscan SDK is now officially built to be domain-agnostic and can be used to build sensor AI applications in multiple domains. Note that some of the content of the SDK (sample applications) or the documentation might still appear to be healthcare-specific pending additional updates. Going forward, domain specific content will be hosted on the HoloHub repository.

The Holoscan container includes the Holoscan libraries, GXF extensions, headers, example source code, and sample datasets. It is the simplest way to run sample streaming applications or create your own application using the Holoscan SDK.

Visit the NGC demo website for a live demonstration of some of Holoscan capabilities.

The Holoscan container is designed to run on any of the Holoscan Developer Kits (aarch64) as well as x86_64 systems.

For a full list of Holoscan documentation, visit the Holoscan developer page.

Set up your developer kit:

Make sure you have joined the Holoscan SDK Program and, if needed, the RiverMax SDK Program before using the NVIDIA SDK Manager.

SDK Manager will install Holopack 1.1 as well as the nvgpuswitch.py script. Once configured for dGPU mode, your developer kit will include the following necessary components to run the container:

Refer to the User Guide for additional steps to support the AJA capture card.

You'll need the following to run the container on x86_64:

The Holoscan container includes the applications below. C++ applications currently need to be run from /opt/nvidia/holoscan to resolve the paths to the datasets. Python applications can run from any working directory since HOLOSCAN_SAMPLE_DATA_PATH is set as an environment variable in the container.

Based on a LSTM (long-short term memory) stateful model, these applications demonstrate the use of custom components for tool tracking, including composition and rendering of text, tool position, and mask (as heatmap) combined with the original video stream.

Full workflow including a generic visualization of segmentation results from a spinal scoliosis segmentation model of ultrasound videos. The model used is stateless, so this workflow could be configured to adapt to any vanilla DNN model.

The Multi AI operators (inference and postprocessor) use APIs from the Holoscan Inference module to extract data, initialize and execute the inference workflow, process, and transmit data for visualization.

The applications uses models and echocardiogram data from iCardio.ai. The models include:

The Holoscan container includes the examples below to showcase specific features of the Holoscan SDK. C++ and GXF examples currently need to be ran from /opt/nvidia/holoscan to resolve the paths to the datasets. Python applications can run from any working directory.

Minimal example to demonstrate the use of adding components in a pipeline. The workflow in the example tracks tools in the endoscopy video sample data.

Bring Your Own Model - Colonoscopy

This example shows how to use the Bring Your Own Model (BYOM) concept for Holoscan by changing a few properties of the ultrasound_segmentation app to run a segmentation of polyps from a colonoscopy video input instead.

These examples demonstrate how to use native operators (the operators that do not have an underlying, pre-compiled GXF Codelet):

Notably, the two GXF codelets have not been wrapped as Holoscan operators, but are instead registered at runtime in the compose method of the application.

This example requires cupy which is included in the x86_64 container. You'll need to build and install cupy for arm64 if you want to run this example on the developer kits.

The Holoscan container includes the source code of the examples listed above to showcase how you can build your own applications using Holoscan SDK and CMake. You can build from those source directories or copy them anywhere on the system to experiment with.

If you build a C++ or GXF example that depends on external data, make sure to edit any relative path in the yaml config if you want to run from a different working directory.

By pulling and using the container, you accept the terms and conditions of this End User License Agreement.